This is the second installment of Monday GTD Moment, where I take a post to blog about Getting Things Done and how it applies in an academic setting. Here’s the first post. If you’re unfamiliar with GTD, here’s a good overview, and make sure to read David Allen’s book that started it all. 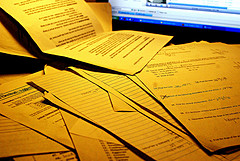 It’s week 5 of the semester for us, which is crunch time for students — and professors. This is the time of the semester when everybody has tests and papers all due, usually on the same day, which means there’s lots of grading. I don’t like grading, but it has to be done. And if I treat grading lightly or let it pile up, I will make mistakes when I grade and students won’t get the feedback they need to improve in a timely way. As an academic type, grading is one of the most important, difficult, and time-consuming features of my job and therefore requires careful management. But it doesn’t fit neatly within the GTD framework which I use semi-religiously to handle all my other productivity issues. So here are a few lessons I’ve learned that have helped me use GTD to be a better grader.

1. Grading is its own separate context. This is not canonical GTD doctrine. In David Allen’s book, contexts refer to physical locations or tools that you have on hand, such as @home, @phone, and @errand. Contexts are about where you are or what you have available to work with. But I’ve found that, unlike in the business world, in the academic world there are not only contexts for locations and tools but also activities where I have to be in a certain “place” in a mental sense to get them done. Grading is one of those contexts. I can grade basically anywhere and I don’t always need particular tools to do it, but I do need to be in a particular state of mind to grade. And while I am grading (and even for a few minutes after I am done grading) I can’t easily switch gears — much the same as if I were running an errand or talking on the phone. Also, and importantly, I’ve found that if I try to shoehorn my grading into a typical place/tool context like @macbook or @office, grading tasks get put into the same place as non-grading tasks, and guess what kind of task would usually win my attention? Having an @grading context helps me to maintain my focus regardless of location or tool needed. When I have some time and space to grade, I focus in only on the tasks under @grading without interference from stuff that is not grading (unless I choose to look at multiple contexts at once).

2. Most grading “tasks” are really projects. One of the main problems I had early in my career with grading was that when confronted with a grading task, like “Grade Calculus test 1”, it took so long to get it done that it became demoralizing even to think about it, and so I’d shelve it and procrastinate. What I learned through GTD is the crucial definition of the project: A project is a thing that needs to get done but which requires more than one physical action to complete it. That’s all. Nothing more. Projects are not always highly complex long-term constructions — making a peanut butter sandwich is technically a project. Upon adopting this wide-open criterion for projects, I realized that the reason it’s easy to get demoralized by the sheer quantity of grading is that we think of grading a test as a task, when in fact it’s a whole lot of tasks all related to the same thing that needs to get done. As David Allen says, you cannot “do” a project. You can only “do” a physical action. So where a prof can get discouraged by looking at the one “task” of grading a calculus test because it takes hours and hours of work, by seeing one’s progress through the various tasks of the project (Grade problem 1, grade problem 2, etc.) you can feel, rightly, like there’s stuff getting done and you can see your progress. This is just an extension of what we math profs always tell students: When you have a difficult problem in front of you, break it down into manageable parts that you can do, and then do the first one.

3. Grading tasks have to be broken down into granular tasks — but not too granular. There’s a question related to what I just wrote in (2): What exactly is a single, physical action when it comes to grading? It’s possible to be too granular in breaking a project down into tasks. For example, if I took my calculus test and broke it way down into tasks — Grade Alice’s problem 1(a), Grade Bob’s problem 1(a), and so on throughout all my students’ work on problem 1(a) in all my sections of calculus and then throughout the entire test — then the list of tasks is so detailed that it takes longer to enter it than it does to actually do the tasks. But we do need to break projects down into their constituent tasks, so some happy medium needs to be found. For me, the middle ground is to consider the grading of one section’s worth of papers on one problem — or perhaps one page of an exam — as a “task”. So “Grade Calculus Test 1” would go in as a project, and the tasks in this project might be “Grade Section A page 1”, “Grade Section B page 1”, “Grade Section A page 2”, and so on. And of course these are all filed under the @grading context (unless there is a good reason not to, for instance if grading requires the use of a computer).

Here’s what it looks like right now in my system for one particular item, the Quarter-Term Exam for my calculus classes: 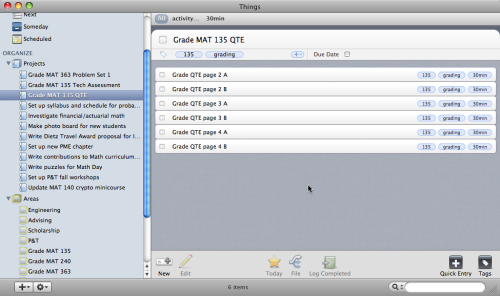 The A and B refer to the sections I teach. As you can see, I still have a way to go. But because I am conceiving of grading this exam as a project rather than as a single monolithic task, I can at least feel good about the fact that I got page 1 graded for both sections, and I have a reasonable quantified sense of how much longer I have to go. So I don’t get discouraged. (Or if I do, it’s because of what I see when I grade, not because of the grading itself!)

Have a productive week, and don’t let the stacks of papers get you down!

One response to “Monday GTD moment: Handling grading in GTD”