Happy New Year, everyone. The blogging was light due to a nice holiday break with the family. Now we’re all back home… and I’m taking off again. This time, I’m headed to the Joint Mathematics Meetings in New Orleans from January 5 through January 8. I tend to do more with my Twitter account during conferences than I do with the blog, but hopefully I can give you some reporting along with some of the processing I usually do following good conference talks (and even some of the bad ones).

I’ll give Casting Out Nines readers a sneak peek at my two talks by telling you I’ve set up a web site that has the Prezis for both talks along with links to the materials I mention in the talks. And if you’re there in New Orleans, come by my talks if you have the slots free or just give me a ring on my Twitter and I’d love to meet up with you.

Comments Off on Bound for New Orleans

.Full text of these numbers is here and here.

Of course what you are really wanting to know is how my spreadsheet models worked out for predicting the number of digits in these primes. First, the data:

) was, unsurprisingly, way off — predicting a digit count of over 24.2 million for

. But the sixth-degree polynomial — printed on the scatterplot at the post linked to above — was… well, see for yourself:

There’s only one piece of bad news that prevents me from publishing this amazing digit-count predicting device, and you can spot it in the graph of the model: 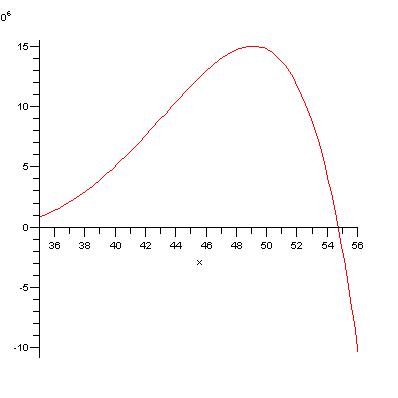 So evidently the number of digits in

will max out around

and then the digit count will begin to decrease, until somebody discovers

, which will actually have no digits whatsoever. Um… no.

Estimating the digits in a Mersenne prime — for dummies

At the end of this post, I made a totally naive guess that the recently discovered candidate to be the

, the 45th Mersenne prime, would have 10.5 million digits. There was absolutely no systematic basis for that guess, but I did suggest having an office pool for the number of digits, so what I lack in mathematical sophistication is made up for by my instinct for good nerd party games. On the other hand, Isabel at God Plays Dice predicted 14.5 million digits based on a number theoretic argument. Since I am merely a wannabe number theorist, I can’t compete with that sort of thing. But I can make up a mean Excel spreadsheet, so I figured I’d do a little data plotting and see what happened.

If you make a plot of the number of digits in

, the nth Mersenne prime, going all the way back to antiquity, here’s what you get:

Admit it — one look at this plot and you’re itching to add some trendlines. Here’s what you get when you add both an exponential trendline (perhaps the obvious choice given the shape) and a 6th-degree polynomial:

The exponential one has a higher

value, but that’s perhaps misleading because of the really good fit for all those low-digit Mersenne primes that happened prior to around

. We’ll take that issue up in a moment. But for now, let’s put those trendline equations to work. The exponential trendline would predict that

would have a digit count of

which is obviously rather a lot more than either my prediction or Isabel’s; and if you put in

into the 6th-degree polynomial, you get a digit count of 11819349, which is in the ballpark of both my rough estimate and Isabel’s estimate.

in 1952. A more accurate idea — if you can call this kind of reasoning accurate in the first place — would be to run the numbers starting at around

and seeing what we get. I’ll save that for later, unless somebody wants to beat me to it.

My busier-than-usual Spring Break is all but over with. Here’s a brief update.

The ICMC went off much better than it looked like it was going to. This was my first of a three-year stint as Student Activities Director for the Indiana section of the MAA, and while my predecessor was really great an answering my questions about how to organize the ICMC, he could only answer the questions I could think of, and the un-thought-of questions were starting to pile up at an exponential pace the week before the contest. But with the generous help of Mike Axtell, who — sadly — is leaving the Indiana section for a new position in Minnesota, all the logistics went off just fine and we had no major incidents. Kudos to the Purdue, Rose-Hulman, and Taylor teams who finished first, second, and third respectively.

That was last weekend. On Tuesday and Wednesday of this week I had a very nice time at Benedictine University near Chicago as the guest speaker to the Math Club and to Manu Kaur‘s topics course in cryptology. I gave a talk to the Math Club on cryptology in general — 50 minutes to cover the whole subject! — and despite some technical difficulties, the talk went reasonably well. There were close to 75-80 people in the audience! Then, the next day, I gave a talk on the Digital Signature Algorithm to the crypto class. In between, I got the rare opportunity to talk shop with Prof. Kaur on cryptography, and I also got a very nice tour of nearby Naperville, which is really quite lovely. (Not what I expected for Chicagoland suburbia.)

Benedictine has a fine department, and I was especially impressed by their students. To have close to 80 students show up in the middle of the day for a Math Club ta,lk at a school of under 3,000 students, is really amazing, and I got some very good questions after the talk. Following the digital signatures talk, one student asked me a really insightful question about Blowfish and SSL encryption; not only was this an undergrad asking the question, he was an undergrad chemistry major. And everywhere you looked, students were working on things — the science labs in particular seemed to be full every moment I was there.

Special treat for me: I got to spend the night in the extraordinary St. Procopius Abbey amongst the Benedictine monks. I’ve been reading Thomas Merton and the like for a long time, and the monastic life has been a guiding force in my Christian experience ever since I became a Christian, but until this week I had never actually gotten to experience monastic life firsthand. The abbey itself is breathtaking, with its Edward Dart-designed architecture combining soaring vertical spaces with hidden rooms for prayer and meditation, with a common thread of simplicity and silence throughout. I’m considering making a longer retreat there sometime soon. Something about the kindness, simplicity, and warmth of the abbey and the monks who live there follows one home from a place like this, and I could certainly use more of that.

So I’m wrapping up break doing the stay-at-home dad thing, having stayed with the girls for the last couple of days and spending the weekend doing the same before getting back to work on Monday. Ironically, this semester I made the conscious choice at the beginning not to emphasize scholarship so much but focus almost all my energies on teaching, but I ended up with one of the busiest semesters I’ve had scholarship-wise in a long time, mostly stuff that I have done or wrapped up this week! Now to finish off those pesky last five weeks of the semester.

On tour and on break

I’ve got a pretty full next week ahead of me. On Friday I’ll be in South Bend at the Indiana MAA section meeting, where I’ll be in charge of administering the Indiana Collegiate Mathematics Competition (read: putting out fires and making copies and grading). On Tuesday and Wednesday, I’ll be in the Chicago area giving a couple of talks on digital signature algorithms and on cryptology in general at Benedictine University. Sunday and Monday I’ll be (somewhat frantically) getting those talks fine-tuned. Next week is also spring break for us, which means it’s spring break for my kids as well, which means I’m a stay-at-home dad for a little while — perhaps the most enjoyable task of all of the above.

So I’ll be blogging only intermittently until next Thursday or so, just so you’ll know. I’ll be more likely to Twitter, so that’s where you can find me online most likely.

Today is the birthday of William Friedman, one of the fathers of modern cryptology and an unsung American hero from World War II.

Before Friedman, cryptology could be described at best as a hodgepodge of tricks and unproven methods for securing information. Some tricks worked better than others. But there was no math in cryptology to quantify the strength (and exploit the weaknesses) of ciphers, really, until Friedman came along and brought the power of modern statistical techniques to bear on such problems as breaking rotor-machine ciphers. He almost single-handedly broke the Japanese PURPLE cipher, and in what’s surely one of the greatest problem-solving feats of all time, his team was able to complete reconstruct a PURPLE cipher machine using only plaintext and ciphertext samples — no technical diagrams were used.

He later suffered a major nervous breakdown, blamed mostly on his intense work on the PURPLE problem. I don’t think most human beings would have lasted even as long has he did and would have gone much further over the edge.

Here’s a page on Friedman at the National Security Agency web site. And here’s the Wikipedia article on Friedman. He’s a fascinating figure in both math history and American history, and more people should know about him.

Check out problem 5 on the final exam I am giving today in my Cryptology topics class.

Comments Off on Perhaps my favorite final exam problem ever.

Stanford University’s Folding@Home project, which puts personal computers to work studying the complicated process of protein folding, could soon get a big boost from an unlikely direction. Starting this month, owners of Sony’s PlayStation 3 video-game console will be able to take part in the research project when they’re not busy playing games.

Researchers have recruited about 200,000 desktop machines to participate in the project, which has implications for medical science. But the officials are bullish about PlayStations, according to Scientific American, because the gaming devices actually perform some simulations faster than most computers.

Here’s the whole Scientific American story. And there’s lots more distributed computing projects where that came from, such as Project RC5 which our Mac mini at home crunches on all day and night.

Fall Break is upon us, as is fall itself with rainy, cool weather today. It’s a break, but a full one:

Comments Off on Fall Break overview